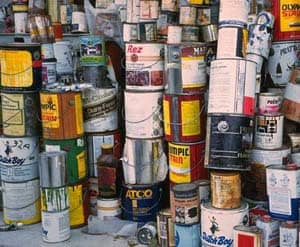 Solvents are essentially the oil in oil-based paints. The solvent is the organic liquid base that holds the homogeneous concentration of paint pigments, additives, and other compounds. After application, much part of the solvent evaporates (VOC emissions), leaving the paint on the wall.

Since the hazardous environmental effects of VOCs are well-established, painters mostly use the water-based latex or polymer paints. These paints also consist of an organic solvent, but in significantly less amounts (a minimum of 15%). Data shows that currently about 80% residential painting works are done with latex paints.

However, the oil-based paints remain the most popular choice for industrial coating, with an estimated 65% market share. Industrial works prefer oil-based paints because they have a relatively faster drying time, and in some instances can offer a thicker coating in a single application (thereby being more cost-effective).

The ‘oil’ or solvent is imperatively a petroleum-based product. A wide range of organic chemicals are used as a solvent, varying from one manufacturer to another. The compounds used as solvents include Isophthalic acid, Phthalic anhydride, glycerine, TMP, Penta, benzene, toluene, mixed xylene, heptanes, hexanes, VM&P naptha, and ethylbenzene (BTEX).

Inhaling the VOC vapors is directly harmful for your health and it also affects the protective ozone layer. In addition, VOC also reacts with oxygen in the presence of sunlight to generate harmful ozone at ground level, causing health problems.

In some states, legislations are in place to use water-based paints over the oil-based ones. However, the oil-based paints have been used traditionally and many painting services (especially old ones) still prefer using them. The customer should always confirm this aspect while hiring a suitable service. For residential works, the professional will usually choose a water-based paint.

Anyone using the oil-based product should be conscious of the environmental impact because the earth needs to be saved from pollution. Industry managers choose solvent-based paints often, but the climatic concerns remain the same. At a level, it is an ethical concern for the painting service, the business manager (contacting the painters), and the homeowner.

The application of an oil-based paint should always be done in a well-ventilated room. This allows the VOC emissions to not form a smog layer in the confined space. The thick aroma of paint in a newly painted space is actually the harmful effect of inhaling the VOC. These are also highly flammable, so painters should be careful to avoid smoking when mixing paints.